Project Details
This project involved the conservation, repair and reuse of 14 Henrietta Street as a museum, showing its development from a mansion for the very rich to a tenement housing more than 100 of Dublin’s poorest citizens. Oldstone Conservation was contracted by GEM as a specialist to undertake both internal and external works within the building as detailed below.

Works to both the front and rear façade were similar. Bricks were replaced by sourcing matching replacements. Pointing repairs had to match the existing pointing locally. Patent window reveals were removed and replaced with feather edge reveals in lime render. Paint was removed from the Portland cills on the front facade. Granite cills to the rear were cleaned, repaired and/or replaced.

Paint was removed from the front door stone surround and repairs undertaken. The Portland stone door reveals were replaced with new. The railing base walls were recorded, removed and reinstated. Basement lightwells were cleaned and lime washed

Internal Lime Render
Due to the fabric of the building being of such historic importance it was imperative that as much of the existing render, paint and wallpaper be conserved as possible. Oldstone were responsible for conservation works to the existing wall render throughout which involved the use of sensitive repair techniques such as grout injection, installation of stainless steel screws and washers and crack repairs through to complete replacement where the render was too friable or missing. This required close co-operation with the conservation architects.

Internal flagstones
The existing flagstones in the basement and ground floor were dimensionally and photographically recorded and stored within timber boxes until ready for reinstatement. The reinstatement involved repairing the existing stones (where possible) and replacing those beyond repair all of which had to be placed in the original positions.

Internal Fireplaces
The fire places had been altered throughout the centuries to suit the fashions and needs of the time. Oldstone removed the various adaptations to reveal the 18th century fire backs and repaired any damage to the bricks. A number of the hearths survived but were in various states of disrepair. These were repaired by grafting salvaged slate recovered on site, and then relaying on a new bed of lime mortar. Hearths beyond repair were replaced with new New Valentia slate hearths.

Most of the original fire place surrounds were no longer intact. Oldstone created replicas by forming a glass fibre mould and tinting the cement mortar to match the colour and texture of the existing Portland stone flags. 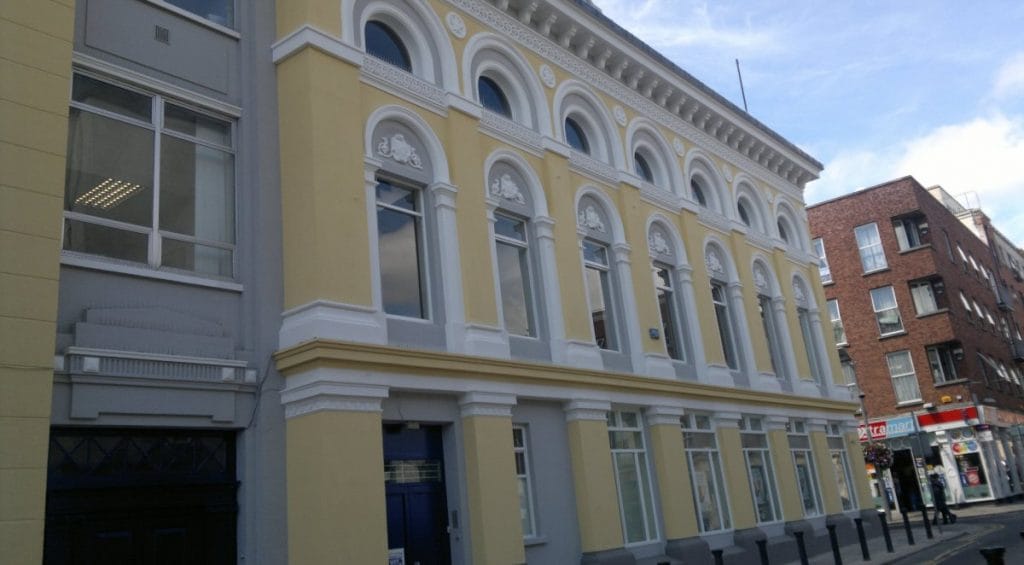